With today marking the eve of St. Patrick’s Day, its time to dig through your drawers and pull out your green attire in celebration of the holiday, but also to avoid those pinchers on the prowl. To me, St. Patrick’s Day is one of those holidays that’s clearly not on the same tier as Christmas, Thanksgiving, or even Halloween but more of a day that is excusable to sit back and enjoy the televised parades or reach for that Jameson or Bailey’s bottle and enjoy a drink or three. On the other hand, I know people with Irish blood pumping through their veins will disagree and say that there’s a lot more to it. Each year, March 17th strikes the day of celebration of Saint Patrick, who many centuries ago brought Christianity to the Emerald Isle, also known as Ireland. It’s said to be told that St. Patrick used the shamrock to break down the Christian fundamentals of the Holy Trinity. The Holy Trinity, which refers to the Father, Son, and the Holy Spirit. One of the largest celebrations of St. Patrick’s Day in our home country is taken place in Chicago, Illinois. As a matter of fact, every Saturday before St. Patrick’s Day the city dyes the Chicago River green, which many decades ago was fused from an environmental issue. 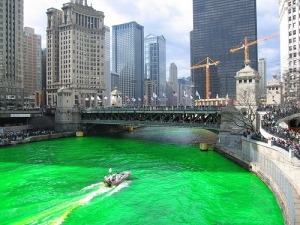 The Chicago River is dyed green every Saturday before St. Patrick's Day.

Up until the 1960’s, all the industrial garbage the Windy City had produced over the years heavily polluted the Chicago River. Eventually, environmentalist put their foot down and got the city to pass pollution regulations protecting the river.  A man named Steve Bailey was one of the business managers of the Plumbers Local Union for Chicago at this time. Bailey, nonetheless, was also a voice for the St. Patrick’s Day plans for the city.One day in late 1961, a plumber walked into Bailey’s office with splashes of green all over his overalls. Amused and curious about these green stains, Bailey was eager to hear the story behind it.  As it turned out, the stains were from dye that had been put into waste lines to see whether or not buildings were still dumping out into the river. In other words, the plumber placed the dye into these building’s waste systems and observed near the end of the river for the emerald green dye in the water. It was suddenly then when a tradition had been born.

Over the years, people have made pushes to make the dye substance more environmentally friendly.  They now use vegetable dye instead of the original outdated fluorescein dye that was also used during WWII to find soldiers in the ocean after their plane had been shot down. Water pollution issues in the U.S. have been addressed for over fifty years and in certain cases can indirectly aid other causes such as St. Patrick’s Day in Chicago. Here’s to a wonderful and safe St. Patrick’s Day, cheers.

Posted in Chicago, In the News, Pollution