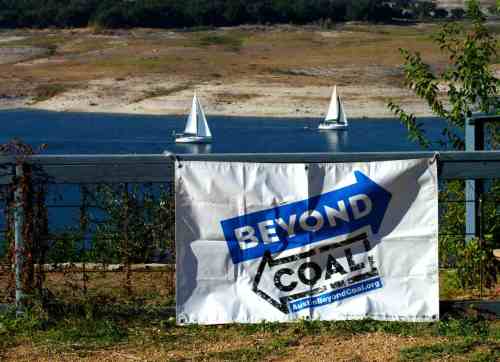 Austin Beyond Coal sure knows how to throw a party!

Last Saturday, November 17th, the Austin Beyond Coal campaign hosted a great lakeside party at the Iguana Grill to kick off efforts in the lakes region to phase out the Fayette coal-fired power plant.

The Fayette Power Project is a 1,600 MW coal plant plant located in Fayette County, Texas that uses more than 5 billion gallons of water from our river and lakes every single year.  In a time of extreme drought, this is water that could be put to better use supporting our communities and farms, or simply being conserved.   As you’ll see in the pictures below, the fact that we are still in one of the worst droughts this state has every seen was very obvious while out on Lake Travis last weekend.

Attendees heard from Austin Beyond Coal volunteers as well as Dr. Lauren Ross, an engineer who knows quite a bit about the relationship between water, coal and the LCRA; all of this while enjoying great food, great music from the Bouldin Creek Bobkat Band and a beautiful Texas sunset.

Missed out? No problem! For information on how to get involved in efforts to phase out of the Fayette coal plant and free up 5 billion gallons of water a year, email lydia.avila@sierraclub.org.

After losing a 26,000 acre feet per year water contract with the Lower Colorado River Authority (LCRA), the White Stallion Energy Center, a 1200 MW proposed coal plant for Matagorda County, Texas has had to scramble to find other sources of water. As a result, the developers announced a costly design change that they claim will reduce their water needs, but still require the equivalent of almost 1 billion gallons of water per year (about 3,000 acre feet).  To meet this demand without a contract from LCRA, White Stallion has quickly turned to private landowners in Matagorda County in an attempt to gain access to groundwater.  So far, most of the smart people of Matagorda County have not sold their private water, and the few sellers the coal plant’s developers have identified are not selling enough to meet White Stallion’s water needs.

Most critically, not only is the groundwater supply that the developer has identified not sufficient to meet White Stallion’s needs, but groundwater is also an unreliable water supply for a baseload utility planning to operate in a drought-prone state.  The Coastal Plains Groundwater Conservation District (CPGCD), which manages groundwater for the area, adopted amendments to their rules on June 29th, 2012 to allow them to better manage and respond to aquifer conditions such as the ongoing historical drought.  In order to protect the health of the aquifer for future generations, the District has implemented a curtailment scheme that will be implemented based on aquifer conditions (Subchapter B: Production Limits, Section 6.11.c, page 53).   This is a proactive and sustainable approach to groundwater management and is meant to ensure the viability of the aquifer for future generations.

What does this mean for White Stallion and other permitees?  If aquifer conditions reach triggers laid out in the rules, anyone who applied for a water permit or amended their permit for a different use after 2011 would be required to restrict their pumping by up to 80%.  Since both of the landowners who have agreed to sell their water to White Stallion meet these criteria, only 600 acre feet of water per year is “guaranteed” during times where aquifer levels are low.  Furthermore, all permits, under the CPGCD’s rules, are only valid for 3 years at a time– all permits are up for renewal every 3 years (Subchapter B: Application Requirements and Processing, Section 3.15.a, page 27).

Given the severity of the Texas drought in the past and its ongoing nature, it’s possible we will see curtailment in the future.   Does this seem like a good investment to you?

Pedernales Electric Cooperative, one of the largest and fastest-growing electric cooperatives in the nation, finally officially adopted policies on renewable energy and energy efficiency. Today, the Board of Directors, following a multi-year discussion, approved two resolutions involving the future of their energy choices, making their transition toward a cleaner energy future a little brighter.

First, the Board adopted a policy stating as their annual goal that the electric cooperative provide services, education and dollars toward energy efficiency, conservation and demand reduction programs designed to reduce growth in demand by 20% each year. While a report released last year by a consultant estimated that setting such a goal would require that PEC spend roughly $4 to $5 million per year on incentives and rebates, Board members and PEC staff emphasized that they would assess the programs each year and look for those that most cost-effecitvely meet and exceed these very reasonable goals. While the goals adopted fell short of the Sierra Club recommendation of setting a goal of at least 30% of growth — the same being met by Investor-owned utilities like AEP and ONCOR –and well short of goals adopted by CPS Energy and Austin Energy, they are indeed a good start toward bringing PEC customers programs designed to save energy and build on the programs already in place at the electric cooperative.

In addition to the resolution on energy efficiency, the Board of Directors adopted a mandatory goal that the cooperative obtain at least 30 % of its capacity for energy come from renewable resources like wind, geothermal and solar energy. According to the staff, PEC currently obtains about 20% of its capacity from renewable resources, both through its contract with LCRA which includes wind and hydro power, as well as a separate wind contract it has. By adopting the resolution, those types of contracts are likely to increase in the near future, as well as specific programs designed to help get PEC cooperative members to invest in solar technologies on-site. The new PEC goal is more ambitious than the 20% goal established by CPS Energy, the energy provider in San Antonio, though not quite as aggressive as the goal adopted by Austin Energy.

While the two new policies caused some PEC members to complain either that they went too far, or not far enough, both resolutions will require an annual accounting and analysis, meaning the PEC will be able to adjust the timing and scope of the goals going forward.

For information about PEC’s current energy savings programs, visit their blog page here. For a copy of the Board resolutions, visit here.

SAVE THE DATE: September 29th-30th The 12th Annual Renewable Roundup is Back!

HOW?!?!: For more information on how to get involved with the Roundup as a either a participant or patron, visit http://theroundup.org/.

WHO?!?!: Everyone and anyone is invited! We encourage all individuals and families to come out to this great event looking to learn about sustainable living practices. This event is proudly brought to you by a joint effort from TREIA, Texas Center for Policy Studies, and The Texas Sierra Club Lone Star Chapter.

Great News!  The annual Renewable Energy Roundup and Green Living Fair will be taking place again this year in the beautiful and historical town Fredericksburg, Texas! Organized by the Texas Renewable Energy Industry Association, in collaboration with the Texas Center for Policy Studies and the Lone Star Chapter, Sierra Club, Renewable Roundup is a collaborative event centered around individuals, organizations, and companies passionate about sustainable living.  The event planning committee is working hard on making this year’s show the best ever. The underlining theme of this weekend event strives to promote cleaner and smarter ways of using our resources while educating the public about “Greener” lifestyles and options. This event serves as both a conference and festival, as it enlightens, entertains, and publicizes those interested in a brighter greener future. We would love to have you at this extraordinary event the 4th weekend in September (Sept. 29 &30). Please check out our website http://www.theroundup.org/ to find out more or contact Event Coordinator Laura Rice at info@theroundup.org.

Can’t Wait to See Everyone There! 🙂

~Special Thanks to Mentor and Conservation Director Cyrus Reed~

When the LCRA was considering this water contract over the summer, folks from all over the Colorado River basin rose in opposition to this irresponsible use of water.  If approved, this contract would have allowed White Stallion to take approximately 22 million gallons of water from our river and lakes every single day!  With an extreme drought and no end in sight, community members of all backgrounds wanted to make sure that LCRA did not commit our limited and invaluable resource to a dirty coal plant for the next 40-55 years.

Sierra Club applauds LCRA’s decision to reject the proposed contract and we thank those of you who sent the LCRA board members thousands of emails, made phone calls, showed up at the July meeting to ask the board members not to sell our water to a coal plant.  This is your victory!

Read more about this here.

the Texas Green Report
Create a free website or blog at WordPress.com.