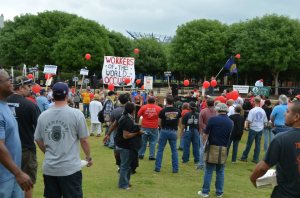 This past weekend in Addison, Texas, a north Dallas suburb, more than 300 environmental activists, labor unionists, public health advocates, human rights supporters and members of the Occupy movement joined together to prevent a  “NAFTA of the Pacific”. The rally demanded the release of the draft text of the secretive Trans-Pacific Partnership (TPP) free trade agreement.

A very big “thank you” to the Dallas and Ft. Worth Sierra Clubs for taking time to learn about the Trans-Pacific Partnership and for attending our events. Another shout out to the Lone Star Chapter interns who helped make over 300 calls to Texas Sierrans about the threats TPP could pose to environmental, labor, health, and consumer regulations in the U.S.

Trade is an issue that crosses all political and issue campaign boundaries. Whether you care about clean air, saving American jobs, fair access to medicine, or holding Wall Street accountable, the fight for fair trade is a much-needed unifying battle that can help us build coalitions that can win the change we want to see.

Thanks again for all your support and hard work, and stay tuned for some next steps as we prepare to mobilize solidarity actions during the next round of negotiations in early July in sunny San Diego, California.

(Dallas and Ft. Worth Sierrans stand with officers and staff from CWA District 6 and Local 6215. Credit: Herb Keener)